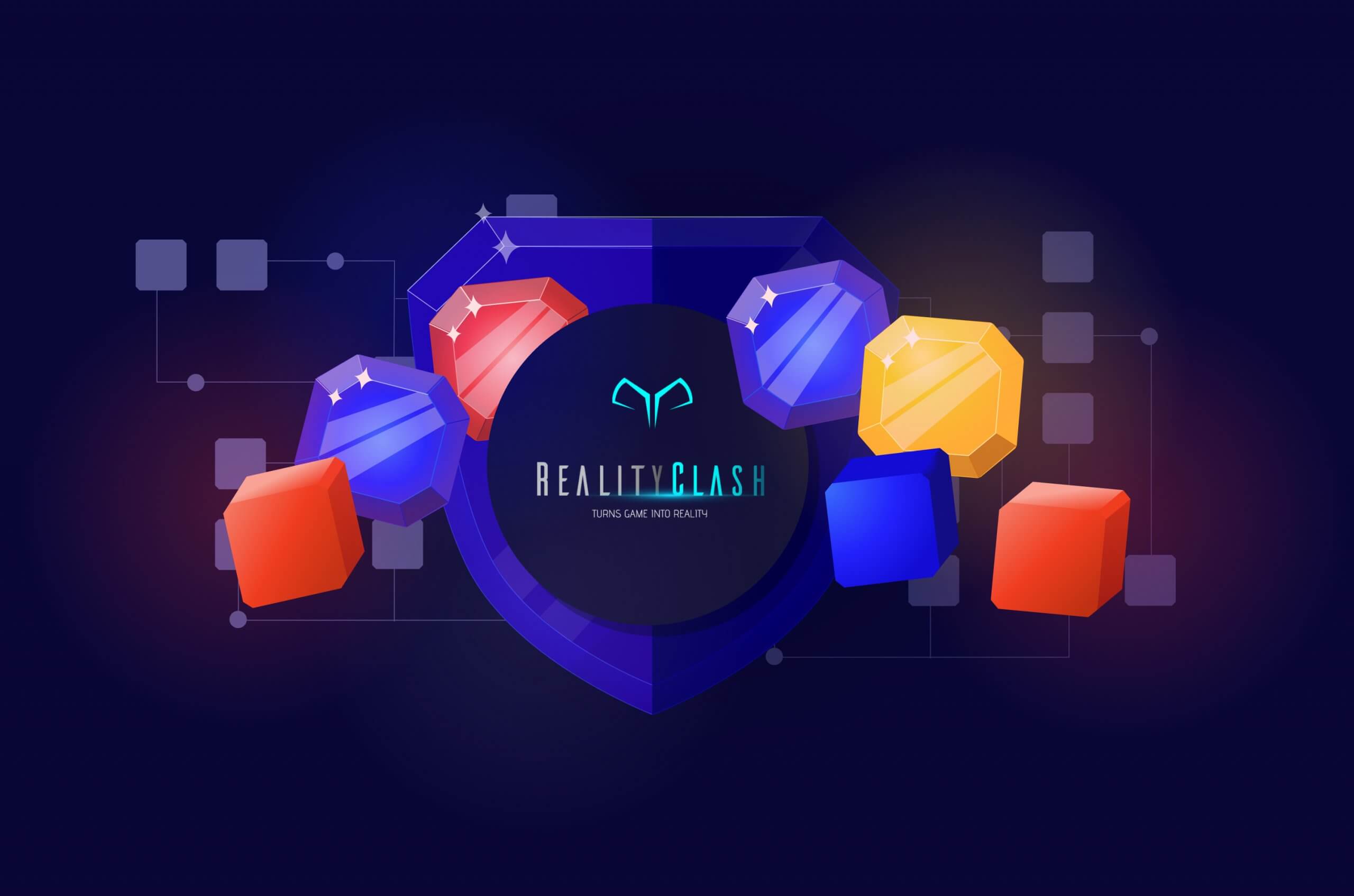 Mobile games have been around for more than a decade. Ever since Steve Jobs announced the iPhone back in 2007, the snake game you’d find on any Nokia brick phone was soon left to the past. Instead, new and revolutionising games were designed for the smartphone. Simple puzzle games, racing games, strategy games and even MMORPG’s were introduced for the gadget the size of a hand. The best part? You could now play games with the simple touch of a finger and by moving your hands around, not just push buttons like there's no tomorrow.

Nowadays, games on smartphones have evolved into many different types and subsections. The classics are still there and extremely sought after. Yet there are new games that come out every day and are worthy of everyone’s attention. Combining the latest technologies such as Artificial Intelligence, Augmented Reality, real-time GPS tracking, 3D modelling and the blockchain, one company has released one first-person shooter you’ll most likely devour.

Before diving into the game at hand, it’s important to mark the importance of the mobile games industry as a solid structure into the gaming world. Ten years ago, there were a handful of mobile games to be considered. The PC and some laptops were the only devices on which you could actually enjoy a video game. Now, your iPhone is 100 times more powerful than your computer from back in the day.

This has made it possible for the gaming industry to reach a value of $152 billion at the end of 2019. An impressive piece of the pie, at 45% is represented by just mobile games, which are worth a staggering $68.5 billion. That’s a new market of just 10 years, a market that was nonexistent in 2007, which is now worth a gazillionth of money. And the investors see and love it, pumping $9,6 billion into the industry just in the last month of 2019 alone.

According to the official website, Reality Clash is the very first AR combat mobile game ever developed. It combines blockchain technologies with AR and AI for the ultimate mobile gaming experience. The efforts of Reality Gaming Group, the team behind Reality Clash, have gone into combining Augmented Reality, blockchain and cryptocurrencies to offer the average player a new experience into an industry saturated by the same old games.

Reality Clash first made it out into the world in 2019, when it had a soft launch. Since then, it has become available on both Android and iOS devices in many places around the world like the UK, Russia, New Zealand, Spain, Denmark, Italy, the Philippines and Australia. The game will soon launch in South Korea and China.

Features of the game

Reality Clash comes with three important features that are present in this game alone of its type, and none other.

At its core, Reality Clash is not much more than a first-person shooter, just like the famous Counter-Strike is. The innovative gameplay is what sets this game apart from the crowd. The phone that the game is running on uses AR technology which gives players a first-hand experience when playing other real-life players who are in locations across their hometown. Once you’re in the game, you can start figuring out the tasks of the day and where you’re heading.

Reality Clash works on the blockchain, on a platform that comes with personal cryptocurrency, the Reality Clash Coins or RCC. The RCC is an Ethereum-based ERC-20 token. In order to advance more easily within the game, players can buy RCC and then use it in-game to purchase weapons, special powers and armour. All of these can be found within the Armoury (we’ll be talking about it further down this article) which is the open market of the game. For purchasing RCC’s, players can use a VISA, Mastercard or Ethereum.

You own your digital assets

Most FPS games encourage players to buy and create their own weapons or equipment and store them or trade them for money. This is also the case with Reality Clash. You can go in the game and purchase new weapons you can add to an inventory, as well as create your own weapons using the tools provided by developers.

The most valuable ones are the one-of-a-kind, limited-edition skins for weapons. These skins have real-life value. This means that, even if the game crashes and burns one day, players will still have the crypto-valuable skins on the blockchain, which will allow them to trade the skins for crypto cash.

How to play Reality Clash

Reality clash is using geo-location gaming and a multiplayer first-person shooter battle to create the most surreal experience. The game is set in an “underground world of cryptocurrency and hackers”, for those of you who are all for the story of the game before the actual game. After you’ve downloaded the game on your mobile phone, be it iOS or Android-powered, you’ll watch a short video which will teach you how to enjoy the game the most.

All you have to do after watching the tutorial is to move on the map until you find a marked location. Here, there’s usually a battle waiting to happen. Win the battle and you gain experience points and resources. Besides the normal XP and loot, you can also gain control of an area when battling in a certain Node of it. When you’re in control of a certain area, you will be able to obtain area experience and resources.

Resources are useful as they allow you to build better weapons. If you’re in a team and are controlling a certain area, all of your team members will be able to go there and reward themselves with the resources. In order to build weapons, you will need resources, alongside silver and blueprints. All of these can be found in Node locations or can be purchased in-app. Killing bots and other players will also reward you with these items.

Resources – in-game items that help players build new and better weapons, which can be Blocks, Contracts and Keys;

Silver – the in-game currency you can use to buy different items or pieces of equipment, but also to speed up activities;

Blueprints – pieces of rewards you get from killing bots or other players that you can use as “recipes” for creating new weaponry.

Safe Zone – these are mapped locations that can help you regain your health once you travel to them and avoid being challenged by other players while in them.

Like any other great game, Reality Clash has an incredible backstory that’s based on some true and a lot of fictional events. It all starts back in 2008 when an entity known as Satoshi Nakamoto invented the Bitcoin. Naturally, the computing powers and needs of the world evolved rapidly in order to try and mine each and every single Bitcoin in existence.

Multis, a hacker that appeared sometime in 2017, uncovered a glitch in a node that allowed him to enter an undiscovered reality. Because of this glitch, Multis was able to upload an avatar with his physical form on the blockchain and began creating The Sim, a new world within the digital realm. Somehow, the existence of this new world was discovered and soon enough other players entered it and started battling for supremacy over The Sim.

There are three groups that dominate the realm today, any of them available to players to join: C.A.S.H, which is a Criminal Organisation who wants nothing but to steal whatever they can get their hands on, Kapital, a Corporate Organisation seeking to expand into The Sim, and eMiners, who are working away to interrupt government dominance. Every single move that you make within the game can make or break you, so move with extreme care!

As expected, no serious game on the blockchain would’ve been complete without an open trade market for weapons, unique tokenizable items and currency exchange. Reality Clash has The Armory Store, a special website where players can buy items, trade their currencies for cryptos or the other way around, buy a unique real-world valuable gun and many more.

“COLLECTIBLE, TOKENISED, TRADEABLE” is the message that greets you when entering the website. You can start your journey here as a buyer or a seller, but most people come in as buyers first. You can buy items using in-game currency such as the RCC we’ve talked about above or Ethereum. You can also pay with a credit or debit card.

The Armory is where you can buy all of your limited-edition weapons you can use in the game to put your enemies out. The coolest thing about making a purchase in the Armory? You get your own serial number and proof of ownership for the item you buy. This means that the weapon is not only valuable in-game, as you can shoot other players with it but also outside of it, directly on the Ethereum blockchain.

And then there’s the Marketplace, where people pay other people directly for their items. You can either buy or sell anything from virtual coins to weapons, items, in-game purchased items, even skills and equipment. You can even be a trader without actually playing the game, but just by opening an account, making a purchase and then sell for a profit.

The most important piece of Reality Clash tradeable armoury you can buy is the infamous U9 Bitcoin, the most sought after RC Gun of the entire game. This gun is an actual asset you can trade on the Ethereum blockchain without even having to go in the game or anything of its sorts. You have real, complete ownership over the digital item and can trade it whenever you want wherever you want. If the game closes tomorrow, the value of your RC Gun stays the same.

The future of gaming is now

Hitting the “About Us” page at the bottom of the Reality Clash website, you’re transported to the page of the team behind the game and greeted with a clear message: “Welcome to the future of gaming!” Reality Gaming Group is behind the AR game and represents a handful of people dedicated to forever changing the world of video and mobile games as we know it.

So far, this is as close as a real-life battle between people can get without things turning violent and just by using a mobile phone. As for the future of Reality Clash, there can’t be any downsides to increasing the number of opportunities in-game, create more weapons and unique tokenizable items and spreading the word about the virtual world everyone will soon want a little piece of.